Skip to content
A Noisy Night Out:
A great night was had by all at the North Staffs Road Runners presentation, which took place on Friday 16th January. The evening, held at Florence Sports and Social Club, was a chance to catch up and celebrate with running friends and acquaintances from all clubs.
The proceedings were opened with a wonderful monologue written and delivered by NSRRA president, Stan Winterton. His memories of training for and running the Potteries marathon were very fitting as we await it’s return this year.
A jolly bunch of Newcastle AC members joined other clubs in the applause for the winners of the many awards that followed.
And the red, white and blue featured strongly, with our own awesome Michelle Buckle scooping a table full of trophies for Ladies’ Champion, 1st 35-39, Lady Runner of the Year, Derek Evans award (for best performance by a compleat runner), George Kay award (for 1st L runner at Stafford 20), Compleat Runner award, and a roadrunners standard award. Phew! Wendy Swift lived up to her name, taking 3rd in L group, and first 40-45. Rachel Degg finished a successful first road runners season with 3rd in M, and 3rd 40-45. And Steven Bailey wowed with his first season by winning E group. The unstoppable Jason Blount took 3rd E, and his second Compleat Runner award. Melvyn Askey showed the youngsters how it’s done, winning the 55-59 category. There were two trophies for Andy Worsey, who had a great season, winning group G, and the Ann Nowicki award (for 1st G runner at Alsager 5). Charli Weller got 2nd 45-49, and Compleat Runner award. And last but not least, the Ladies team trophy went to Newcastle: Michelle Buckle, Wendy Swift, Rachel Degg and Charli Weller. Well done ladies, we worked hard for it, and wasn’t it fun?!
Other award highlights were men’s champion Ben Gamble, on fine form as ever, and most improved runner went to Anne-Marie Mountford…one to watch, ladies!
There was much to be proud of for all our winners, as I think we showed in our very noisy appreciation : Newcastle AC definitely won the loudest table award! But also a big well done must go to all the runners who took part in the league. NSRRA’s league is truly unique, and it’s beauty lies in the fact that any runner can compete at any level.
The awards were presented by our own Matt Sandoz, who went on to give a great speech about what running and the league means to him. And then onto the important part: the buffet! And yummy it was too. More prizes were scooped in the raffle, and as people began to depart, a few diehards joined the likes of Carl Martin and Julie and Graham Fletcher on the dance floor…and some very nice moves there were!
For anyone who hasn’t done the league before, or who hasn’t joined for a while, why not go for it this year? It’s fun..We promise!
We will look forward to another noisy night out next year, but first comes the hard bit: running the races! Well done all for 2014, and good luck for 2015 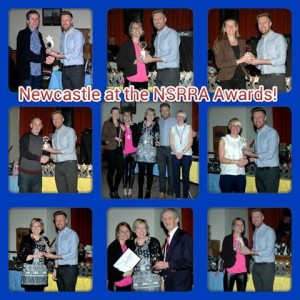