The final fixture in this years North Staffs Cross Country League took place at Rodbaston College on Saturday with our Juniors aiming for multiple individual and Team honours.

In the U/15 Girls we just had two competitors but Poppy Randford in 7th (11.47) and Lily Stevens in 14th (12:30) both achieved their highest placings of the season. Well done Poppy and Lily.

In the U/15 Boys race we had just 2 competitors. Louis Wakefield secured his first league victory with a gun to tape victory in 14.04, Tyler Davison finished in 17th (18.41).  Louis also finished in 3rd position overall. Congratulations to both Louis and Tyler for a really strong league season.

In the U/17 Women’s race we had 4 athletes representing the club. Nadine Tomkinson gained her first league victory (and with it the individual league title) due to leading from start to finish, Nadine won in 16.24, Elizabeth Clarkson finished in her best position this year in 3rd (17.21), likewise Scarlett Cotton was 4th 17.42) and an under the weather Misha Twardochleb was 6th (19.36). Once again the team won the race scoring just 8 points and were overall league Champions scoring just 50 points. Congratulations to Nadine, Lizzie, Scarlett and Misha on a great league season.

In the U/17 Mens Race our team of Lewis Nagington, Elliot Smith and Thomas Mogg were rewarded with another set of consistent performances, finishing 4th on the day but in a fine 3rd overall to secure team Bronze. Lewis finished in 4th (17.11), Elliot was 15th (19.14) and Thomas was 22nd (20.27). Congratulations to all three of our athletes.

In the U/20 Women’s race Rebecca Twardochleb led the overall Women’s race from start to finish to claim her 3rd victory in the league this year and the Senior and U/20 titles, Sophie Goodfellow finished in 7th to claim silver, just pipping teammate Lucy Matthews who finished 8th into Bronze by 1 point. A clean sweep of the podium and Becky, Sophie and Lucy were also key members of the senior ladies team who claimed another big victory and win the league scoring just 66 points (the nearest rivals scored 188). Becky ran 18.35, Sophie 19.51 and Lucy 19.54. Congratulations to all our U/20 Women who competed so well for the club in the league this year.

In the U/20 Mens Race James Fradley finished in 1st place (27.51) and 7th overall in the mens race, Jordan Nixon was 3rd (28.43) and 12th, and Jacob Droogmans was 5th (29.29) and 26th. Jordan claimed the league U/20 Silver and Jacob claimed the Bronze. James, Jordan and Jacob were integral members of the Senior Mens Team that claimed a great Second place in Division 1. Congratulations to all our U/20’s. 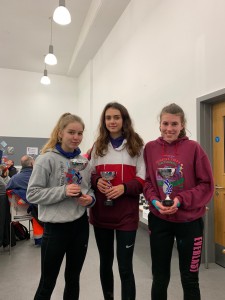 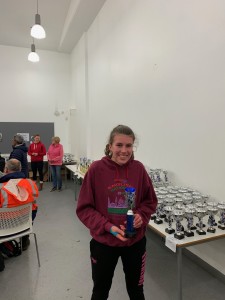 Nadine – Individual and team U/17 Champion 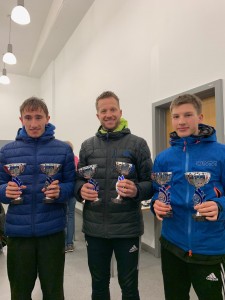 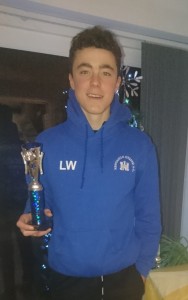 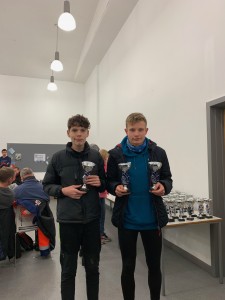 Elliot and Lewis – U/17 Team Bronze 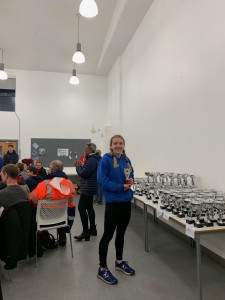