Saturday 8th February saw our U/20, Senior and Veteran Mens team travel to Lilleshall to compete in the final fixture in this seasons Birmingham and District Cross Country League Division 2. Having gained promotion last year we were looking to continue the upward progression and gain further promotion into Division 1 for the very first time. A gap of just 43 points to the team below us in 4th meant we needed another great turnout of members and we had a season high of 19 members running which resulted in us finishing in 3rd on the day with 167 points (and finishing first in the B Team) to secure a tremendous 3rd place in the league and promotion to Division 1 for next season! Lewis Nagington also finished as 2nd Junior over the season despite it being his first as an U/20. Congratulations also go to all the athletes that have represented the club over the season, those listed below plus Ian Bayliss, Jerome Stevens, Jon Ranford and Stuart Cassidy, and extra thanks to all those who acted as officials, helped with the tent or came to support the team this season – it really is one big team effort! 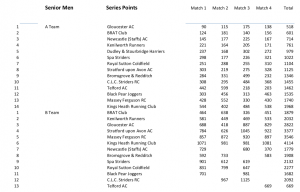