Congratulations to James Fradley who despite illness finished in 6th position in his final English Schools Track and Field Championships which were held over the weekend at the Alexander Stadium in Birmingham. James qualified for the final in 4th position in Fridays faster 2nd heat running 1:53.15 and then finished in 6th position on Saturday in the final in 1:55.88. James record is excellent at the English Schools (the biggest athletics meeting in Europe outside of major World or Olympic Championships) having finished 5th in 2012, 1st in 2013, 8th (in his 1500m heat) in 2014, 5th in 2015, 3rd in 2016 and now 6th in 2017. Hopefully James is feeling better when he competes for the Midlands U/20’s at the Cardiff International fixture – Good Luck James from all at the club. 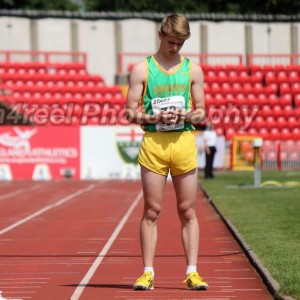