There were sunshine and showers at the first race of the north staffs cross country league at Winsford which made it very wet and slippy underfoot as the races went on. Newcastle (Staffs) AC had a grand total of 41 Juniors running at the event. 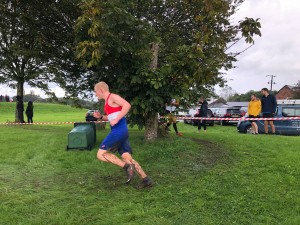 The next race was the U17 Men and U20 women these were combined with the Senior Women , the course they had to do was two large laps which was about 5km. In the U17 Men we had 3 men running the course the team came 4th with 38 points, The first runner to come in was Elliot Smith he ran really well throughout the race and ended up in 4th position in (19.42), next in was Louis Wakefield with 11th in (20.37), and Thomas Mogg who came in 23rd in a time of (23.06). In the U20 women we had 2 runner Elizabeth Clarkson and Grace Ranford, First in was Elizabeth Clarkson who was 16th overall but 2nd junior women in a time of (22.48), Grace Ranford was next in an overall position of 40th and she came 3rd in the junior women in a time of (24.59). Well done to all of you, amazing performances by all.