Sunday saw the top athletes from across the country descend on Sutton Park to represent their clubs at the National Road Relay Championships. We had one team in the Mens and Women’s races and also one team in the U/17 Womens Race (REPORT HERE).

Having qualified 2 weeks previously at the Midlands Championships our senior mens team lined up knowing that they were up against the very best (including Marc Scott who competed at Doha earlier in the week!) and all rose to the occasion and challenge. Racing over 6 legs of the undulating 5.88km course our team improved their time from 2:03.50 two weeks ago to 2:02.17. On leg 1 Felix McGrath recorded 17.59 coming home in 21st place (knocking 12 seconds of his last time out), next up was U/20 Lewis Nagington who improved his time by 15 seconds to record 19:37 putting the team into 41st, Fellow U/20 Jacob Droogmans was on leg 3, and he knocked 11 seconds of his time to record 21:10 and move the team into 58th. On leg 4 Ian Bayliss recorded a time of 20:49 to beat his last time by a huge 24 seconds with the team now in 57th. Tim Sharman ran on leg 5 and recorded 21:03 to maintain the team in 57th. Our final runner on leg 6 was Andy Walker (V45) who we moved into the senior team after his great run in the masters relays two weeks previously, he recorded a great time of 21:39 (another big improvement of 23 seconds)Andy anchored our team home in an extremely respectable 60th position. Well done great running from all the team.

Our ladies team didn’t need to qualify like the men but having finished 9th at the Midlands it was going to be a chance for a slightly different team to see where they could come nationally. The ladies race is over a shorter, but still very undulating, lap of 4.33km. On leg 1 Sophie Goodfellow improved her time from the Midlands Championships by a huge 21 seconds coming back in 29th position, next up was Rebecca Twardochleb who missed last time out due to holiday. Becky recorded her fastest time on this course running 15:38, moving the team up to 17th place. On leg 3 U/20 Elizabeth Clarkson ran 8 seconds quicker than two weeks ago to record 17:20 with the team now in 23rd. Jan Cassidy (V50) was our final leg runner and she ran a great time of 21:15 to bring the team home in 1:10.08 in a fine 39th position. Congratulation ladies, great racing. 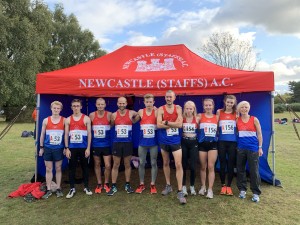